For with her return, all women return, and the Goddess is restored to God’s side in the people’s hearts. This is the prophecy fulfilled.

This week has been ecstatic. There has been a huge resurgence of interest in Mary Magdalene of late. To honor her Feast Day today, I have been invited by my dear friend Ana Otero – Mother of the Mary Magdalene Mystery School, to be part of Mary Magdalene’s Festival of Devotion, which I am blessed to be part of. Over 1,200 people have signed-up to be part of this virtual and triumphant return of the Feminine Christ. Therefore, today, in Mary Magdalene’s honor, I wish to share with you some truths, so that we might better understand Mary’s Biblical fame. To set records straight and uncover the history behind this most beguiling woman.

Setting aside Mary Magdalene as a so-called ‘prostitute’ was a convenient way for the Roman Empire to take the reins of the Jesus story and control its path and narrative. Mary became the scapegoat, and women, as well as the Goddess were dethroned, exiled, disregarded, and disrespected by the new church, and, therefore, also in society. Deftly cast aside as a ‘whore’ who was saved by Jesu, the wife of Christ was thrown asunder. This gave the new church of Rome an opportunity to slip into the position of patriarchal rule over the minds of the collective. Christianity became the new engine for the falling Roman regime, which at that time was losing its grip and power over the lands, wealth, and minds of the people. 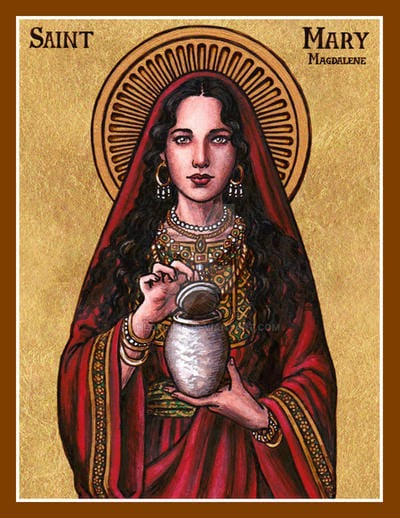 When Mary Magdalene was cast aside, all women, and the Goddess, were dismissed with her.

Within the New Testament, the confusion continues. The number of women bearing the name “Mary” varies depending on which translation of the four prominent gospels one reads. Certainly, it seems as if eight Mary’s are described:

Mother Mary – The mother of Christ

Mary of Bethany – The sister of Martha and Lazarus

Mary – The mother of John

Mary of Rome (who met with Paul)

Mary – The mother of Joses

Mary – The mother of James

Mary – the wife of Cleophas

This divisive confusion of “the Mary’s” was deliberate – to distract from the truth. Let me help clarify:

Mother Mary: The Mother of Christ – Also the Mother of John, James, and Joses (Jesu’s youngest brother). Mary – the wife of Cleophas, is also this same Mary. Cleophas was the younger brother of Joseph. According to ancient law, Mother Mary would have been ‘passed’ to Cleophas as a ‘wife  after Joseph left this world. This of course is an entirely different story than the propaganda of the church, yet it does not in any way, shape, or form belittle her purity, power, and purpose.

Mary of Bethany: The sister of Martha and Lazarus, came to be known as Mary Magdalene. The three siblings inherited the town of Bethany upon their father’s demise. This town was sold after the crucifixion to pay for Jesu and the extended family’s move to France. This same Mary, later met Paul in Rome approx. 15 years after the resurrection. The title “Mary” and nickname “Magdalene” were attached to her person long after the resurrection. Being a Mary, ordained her as a leader amongst women. Our Mary, in this example, was also the apostle to the apostles, and watchtower over the flock. Hence, she was a Mary, yet also a “Magdalene” (tower of light). Her name has nothing to do with the town of Migdal, or Magdala as it later became known. This town was not in existence during the time of Mary. She was a priestess of Divine Feminine mysteries, as well as a healer in her own right. She was not a prostitute. Nor was she a tantric. She was a pure vessel of Messianic female power. The bride of Christ.

By bewildering the narrative of these eight Mary’s, the audience is mystified and a false narrative is given as ‘truth’. This makes Mary Magdalene’s return, as holy bride, crucial. For with her return, all women return, and the Goddess is restored to God’s side in the people’s hearts. This is the prophecy fulfilled.

Yeshua and Mary Magdalene were the representatives of Divinity on earth. Each of them were conduits of love and compassion having come into this world to teach love and unity. To lead by example and light the path for many around the world. Still 2,000 years later, they are the most famous spiritual influencers in history.

When people feel like they are drowning in the stormy waters of mundane existence they turn to religion for comfort. It is BECAUSE of our sufferings that we reach and fall at the feet of God, seeking shelter. Therefore, we owe enormous gratitude to these brave Saints who walked the earth and sacrificed so much for our sake. Our sacred duty is to follow what they have taught. Otherwise, our faith is nothing but sentimentality.

God bless you all.