The Hall of Mirrors: Ignorance & Illusion

There is a purpose behind everything. The Lord and our Lady always have a plan, so do not fear!

Five-thousand years ago, Krishna came to earth to remove the demons, who at that time were troubling the people. Many demons and demonesses were found within the ruling classes, much as they are today. This cathartic pastime of the Lord, killing the demon Denuk-Asura, is as crucial today, as it was then. The Veda’s explain that by reading or hearing this tale from history’s treasure books, sloth, or ignorance, is uprooted from the heart. These are not mere fables, they have enormous power within them, to do the impossible! So have hope… for we are turning darkness into light!

Ignorance is best described as not knowing who you really are. Choosing sleep over wakefulness, procrastination over action, the lazy person loses their ability to think critically. Their intelligence is covered by a mystic sleeping-spell known as maya. This ignorance, which is an energy, darkens our light. We know we are in ignorance if we spend our days only eating, working, shopping, scrolling social-media, watching television, hoarding, or engaging in sexual activities. There is no time for spiritual life, nor desire in such a person, to pray, chant, or receive the nourishment of a daily spiritual practice.

Dhenuk-Asura (asura means demon), was another demon-friend of King Kamsa, the reigning monarch at that time. The King feared Lord Krishna, for it had been foretold that this boy would kill him and end his reign of terror on earth.

Within Vrindavan, there was a forest made of palms. These trees grew in abundance at that time. King Kamsa had appointed Dhenuk to guard the forest of palms, killing any who dared entered the forest to eat the sweet Tala fruits hanging from their bowers. Only the King and his followers were to enjoy the forest’s sweet abundance.

When the Lord and his brother, Balaram, were only six years old, they wandered near the forest with their friends, to take the cows out grazing in the lush pasture. The boys warned the Lord that the Tala-forest was guarded by a powerful demon. They feared going close. Krishna still led the group to the Tala-forest, fearlessly. Playing music upon His flute, He captured the hearts of the flowers, grasses, birds, and animals who were roaming the meadows there. He did this so as to offer them fearlessness, for they had been frozen and terrified for ages.

Krishna began shaking the trees with His bare arms, so that all the heavy fruits, laden with sweet juice, would fall to the earth loudly, disturbing Dhenuk’s sleepy slumber. The demon and his friends had taken the form of donkeys, to hide their real demonic forms. Demons have mystical powers, due to their rituals and sacrifices. Shape-shifting was commonly spoken of in the old-days, before the overwhelm of patriarchy. Now only within secret societies are such things known of and practiced. But 5,000 years ago such things were feared, because they are real.

The demons thought that they could confuse Lord Krishna with their donkey forms. With a great force, Dhenuk and his friends attacked the group, kicking and rearing up at the little children. The Lord’s brother, Balaram, grabbed hold of Dhenuk’s hind legs and began whirling the demon over his head in the sky, throwing the demon, ass first, onto the top of a huge palm tree. The demon was killed instantly. The other donkey followers were next, so the Lord and his brother then set about destroying these troublemakers, one by one, just as one might swat a fly.

The remains of the demons’ bodies stank, contaminating the entire region. The demon’s true nature had been revealed. King Kamsa was once again thwarted by this boy Prince, and he feared for his life, imagining his own death at the Prince’s hand. By the Lord’s divine mercy, the forests were again made clean and the trees and meadows were again sweet. All of the villagers celebrated, carrying the two boys and their friends upon their shoulders, giving thanks for their bravery and strength. Afterwards, they all played and swam in the Yamuna River, where the waters refreshed and caressed the Lord out of extreme devotion. The birds began singing in most enchanting tunes and the pretty gopi-girls of the local villages came out of their gem-laden palaces and cottages to watch from behind the trees, the mighty strength and beauty of the Lord and His brother.

This demon, the ass-demon, represents our foolishness. Our inability to see through the gross material nature – the truth of the soul – the soul’s true predicament. Such ignorance could be compared with being possessed. Enchanted by the illusions laid out before them, such soul’s take mechanical approaches to everything that they do. Nothing has any depth. They work like donkeys, for money to buy a little pleasure, while the true treasure lies in wait. Happiness and love are before our eyes, waiting to be experienced. No longer should we choose sleep over eternal joy.

Even though this story,

Is said to slay our ignorance,

Still we must endeavour,

To remove all contaminants from the consciousness,

Overburdened by our load-carrying, we have forgotten the old-ways. The ways of love. The ways of nature. The ways of Devotion. If you feel overburdened, weighted down by your problems and habits, pray for assistance. You can pray to Lord Krishna and He will, with enthusiasm, remove these contaminants from your heart, casting them very far away, just as He did the donkey-demon. In order to purify and relieve ourselves of ass-like mentalities like ignorance, pride, envy, greed etc., there are processes we shall have to experience. There are ancient rites of purification we can follow, such as holy name, meditation, baptism, ritual dance, drumming, fasting, and prayer. These are the sacred tools of the Divine Feminine. Her tools of transformation are as mysterious, as they are deep. For Her endless waves of mercy, flow, unto all who seek Her ways… 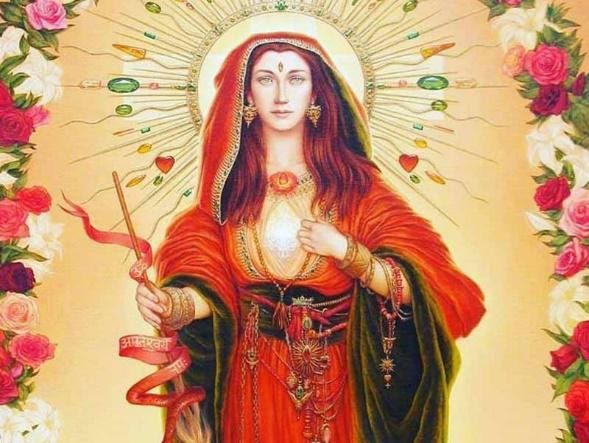 Her remedies for laziness are faithfulness and determination. The darkness that hides, lives within our consciousness. It brings to us great misery. We suffer because of it! This is because we have forgotten what our lives were meant for.

The illusions we see with these two eyes, are not in reality, what is actually there behind the facades we thought of as reality. We have been enthralled, as if under a spell. The troubles of all living beings have been increased because of the demons’ dominion over this land. This has been happening for thousands of years, it is nothing new. They have been designated this yuga, this time-period, to rule. Just as in previous ages, when it was the right of the demi-gods to rule.

It is not all doom and gloom!

There is a purpose behind everything. The Lord and our Lady always have a plan, so do not fear! Within this yuga, the medicine for our sicknesses has been prescribed by the saints and Avatar’s. The holy name of God and Goddess are the medicines which can cure us. Not only of our illusions, but also our attachments and habits. Mantra, or rosary, becomes the vehicle by which we can climb out of constant birth, death, and regeneration (reincarnation). We are also receiving constant cycles of karma while these reincarnations are taking place, and this causes us untold suffering. With every new birth, there is death, and many grief-stricken goodbyes.

There is no security in this world, and the next is entirely of our making. Spiritual practice (sadhana), restores us to life. It offers us the mystical power of the Divine Feminine, who is known as the Mistress of all mysteries. Within Her cauldron of change, we learn to let go of our selfishness (ignorance). We learn to serve the environment, not take from it. We learn how to make every action, into an offering, and we offer every wound into the composting fires of Her mercy, where She easily incinerates all that no longer serves our highest good.