Is This The End Of The World As We Know It?

Lord Krishna still had one last demon to kill, King Kamsa. The biggest demon of them all. Having slayed all those who were sent to kill him by the King’s wicked hand, the Lord set upon the City of Mathura with one intention – to dethrone the demonic rulers from their positions of power. The King deployed his greatest fighters to deter the Prince from fulfilling His sacred duty, and the Prophecy. Inviting Lord Krishna to fight in the grand arena before the whole City, the King planned to kill the Prince in the fighting ring, on his own turf. Angry that all of his attempts to kill the boy had failed, the King was determined to see the boy thwarted – else the prophesied moment of his death was indeed now coming near. A match was organized, and Lord Krishna and His strong-armed Brother, Balaram, entered the colosseum confidently, despite their youthful age. The crowds stood up as the two Prince’s stood before them bravely. Terrified for their lives the people of Mathura cried out, pleading with the King to end the fight, for Prince Krishna was just 16-years old.

The champion demon gladiators of the King immediately began taunting Krishna and Balaram, to incite an angry fight. “You are not men, if you do not fight!” they jeered. Krishna smiled at His brother knowingly, and Balaram suddenly leapt up, grabbing hold of one of the famous fighter’s heads in his strong hands, snapping his neck clean off. The crowds roared with excitement, as no one had ever beaten the fierce, demon-fighters of King Kamsa. The gladiator facing Prince Krishna tried to grab hold of the handsome Prince, but the Lord, known as Nataraj – the Lord of Dance, began darting around the ring, eluding the gladiator’s fearsome grip.

After a time, the demonic fighter became tired of chasing the Lord, his bulky body was weakened by the Lord’s unstoppable stamina. The gladiator tried everything to catch the youthful Prince, yet failed, time and time again. Finally, seeing the distress of the women seated in the audience, the Lord jumped fearlessly upon the muscular fighter’s exhausted body, breaking his neck in one swift move, as easily as one might crack a nut in a nutcracker. 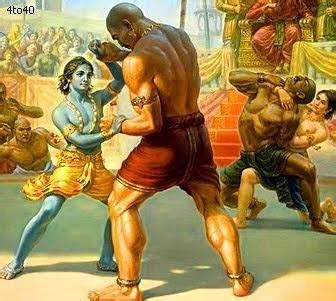 The King understood that death was nearing. Organizing a small army for his protection, he planned his quick escape. Suddenly the Lord jumped high up in the air, like a deer with wings, catching hold of the demon King’s hair, pulling him backwards off the dias. He did this to pay-back the wicked King for having pulled His mother’s hair on her wedding day. Throwing the cruel King down on the ground, the Lord jumped onto the demon’s chest. Soon, because the Lord’s body contains all of Creation within it, the evil King felt the weight of all the universes upon his chest. Choking, for he could not breathe, the King lost hold of his sword, recognizing that death was now upon him. With the King’s decorated sword now in His hand, Prince Krishna dragged the dying King around like a rag doll, finally chopping off the demonic ruler’s head with one cut of his sharp blade. The crowds screamed in shock, and then, when the conch-shell blew to declare victory for goodness – they began cheering – “Ding dong, ding dong, the King is dead, the King is dead!” they sang gleefully. The Prophecy fulfilled and the Royal family were finally exposed for the demon’s they really were.

The realm of human kind celebrated their welcome freedom from injustice, slavery, and suffering.

The Veda’s declare that just by hearing this pastime with faith, we are purified and given a chance for liberation. To end our endless cycles of samsara (reincarnation). Thus I have now shared with you this beautiful story. Know this, the term “The end of the world”, does not signify the end of the world, but the end of the world as we have known it. This world has once again become infected with great evil. Our culture, and moral fiber, are under attack. We are on the brink of a total overhaul. The split between those who believe and those who do not believe, is blatant. Therefore, having faith in God’s power and glory, let us pray for peace during these trying times.

With the elements of earth, bone, and stone,

The Mistress of water, blood, and emotional tides,

Moves through the collective as the Grail of knowledge;

Through Her sacred elements of air and fire,

She unpeels the illusory spells,

Which have been spread over humanity’s consciousness.

Leading our way out of darkness,

Trust in Her power to rule,

Through Her sacred elements,

And with Her holy name…