Who Was Jesus Christ – Messiah, Pretender Or Mortal Man?

“When I first mentioned to my spiritual teacher Srila Bhaktivedanta Narayana Goswami Maharaja, that I was writing a book about the life of Jesus and Mary Magdalene, he revealed incredible secrets about the life of Jesus, which set me in motion to discover the true story of these most famous people in history.”

For me as a practicing Vaishnavi, the story of Jesus, albeit his teachings, held great fascination for me. I began reading early Gnostic documents wherein Jesus’ teachings of tolerance, abstinence, devotion, and his mantra “fast from the world,” much like B.V. Sridhar Maharaja said “die to live”, are constant, and best portray the message he wished to convey for our ultimate benefit.

The teachings I discovered are for seekers of all faiths, for they transcend small-minded religious doctrine which seems, at large, to separate rather than unite the people of the world. Without accepting the mood of selfless service unto others and humility, alongside withdrawal from the objects of the senses, the highest dreams of entrance to the Kingdom seem impossible. Our duty therefore, as sincere seekers, must include a withdrawal from the pleasures and distractions of this world.

When I first mentioned to my spiritual teacher Srila Bhaktivedanta Narayana Goswami Maharaja, that I was writing a book about the life of Jesus and Mary Magdalene, he revealed incredible secrets about the life of Jesus, which set me in motion to discover the true story of these most famous people in history. He confirmed and blessed the project, suggesting that I present Jesus as a Vaisnava (Bhakti-Yogi – Master of Love and Devotion). 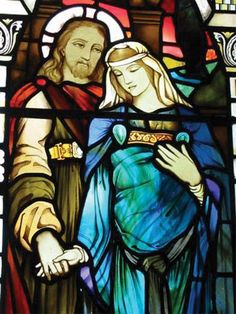 1. Jesu / Jesus – he and his entire family were documented as being vegetarian. The stories of him handing fish to the masses as food, are fables spurred by poor translations of original Coptic and Aramaic language – into Greek – then Latin. Actually the word for “fishes” in this context means loaves (bread).

2. At birth, the family of Christ were visited by three Kings from the East. One from South India, one from Central-India, and one from the North. Each King had been advised by their astrologers, who they consulted on all matters, to go in search of this rare star in order to offer alms at the feet of the long-awaited and expected Messiah (expected Shakti-Vesh Avatara). This pilgrimage of grace would afford the Kings’ enormous sukriti (spiritual merit). Therefore Jesu’s family became connected to the Indian Courts from birth;

3. At age thirteen after his sacred ceremony in Judea, Jesu was sent to South India in order to study at the Palace of one of these Kings. At that time, the fourth Shankar-Acharya was living in Puri, Orissa, and gave Jesu residence within his Ashram (Temple) for some time, where they discussed spiritual philosophy. Jesu was documented as having visited the Jagannath Temple daily where he was offered Maha-Prasad (sacred food) and met with Priests and Brahmins to discuss Bhakti Yoga (the path of loving devotion to the Lord). Eventually Jesu was chased out of Orissa, by threat of death from the Brahmin Priests, for sharing spiritual knowledge to the Sudra people (street people).

4. Jesu visited Northern India, where fulfilling an ancient prophecy of India, he met the reigning King of Kashmir. Many beautiful parables and teachings were shared, the sick were healed, and one person was brought back to life. These things were carefully written down by the King’s administrators, who just like the Romans, documented every interaction with the King.

5. In order to fulfill his Prophetic Messianic mission, Jesu then returned to his land of Judea. This is the first documented time in the Bible wherein Jesus is revealed, since his childhood. These years spent in India are simply known as the “missing years”.

6. After Jesu’s crucifixion, which he survived, he and his family fled to Alexandria and eventually to France (then known as Gaul) – ultimately living out his days in Srinagar, Kashmir (the Valley of the Gods – said to be the Promised Land of the old-Testament).

Jesu’s tomb (Rozabal Tomb) can still be seen there to this day. The locals named him Ysha, meaning supreme Lord, and the tomb, now under Muslim control, is said to be that of a great Saint called “Yuz Asaf” which was a name given to Jesu whilst he preached in Persia. He became famous there, and many Muslims know that Yus Asaf’s teachings are identical to those Jesus preached in Judea. His tomb is known by the locals, to be that of Jesus Christ.

7. Moses is also buried in Kashmir, as is Mother Mary (Town of Muree);

8. The Messiah was magnanimous. He did not come to only help those of the Jewish faith, but all people. His first and last desire was to bring the vision of the Kingdom of God to everyone, without regard for qualification. Jesu’s Messianic mission, as Messiah, was to search out the twelve lost-tribes of Judea and preach to them. Many historians agree that at least eight of these lost-tribes were in India at that time. Hence Jesu searched out those tribes and lived among them, preaching until he died in his late seventies – fulfilling all prophecies entirely.

9. Jesu was a Royal King by birth. He was the grandson of King Herod the Great, his father being the Royal Prince Antipater, and Mother Mary being a Princess in the lineage of David and Benjamin. When King Herod killed his
eldest son Antipater, Mary, who was with child, fled, and was promptly married off to Joseph disguised as a poor village girl – despite being a Royal Princess. The child in Mary’s belly would be the long-awaited King of Israel, and his two-thousand-year old message is a testimony of his power. Still millions flock to his teachings for guidance on how to live.

Herod the Great being only half-Jewish, wanted more than anything to be accepted by the Jewish people as their King. Yet they would never accept him. Hence he married his son and heir Prince Antipater to the Royal Davidic Princess and daughter of the Head of the Jerusalem Temple (Mary), to ensure it would be his grandson who would unite the Romans and Jews, one day becoming their King and ruler. Hence Jesu was known as the King of Jew’s, for indeed it was his birthright to be both King of Rome (since he was son of Antipater), and also of Judea, since he was the long awaited Messiah from the lineage of David;

10. Jesu was married and had three children with his wife Mariamne, known as Mary Magdalene. She was a Princess from the lineage of Benjamin. The houses of David and Benjamin had inter-bred for centuries, since both had Royal bloodlines. Mary Magdalene was a wealthy woman in her own right, famed for having funded Jesu’s ‘tours’. She was a healer, teacher, and master in her own right. She was by some considered to be the Apostle to the Apostles – a far cry from the ‘prostitute’ label which the church gifted her with, in order to have her set her aside, that they could usurp the Messianic power and Throne from the Royal family;

11. At the time of Jesu’s life, it was expected for all men, especially Rabbinical Royals, to marry and have offspring. For a man to remain unmarried and have no children would have been akin to a stoning, for it would imply a man had improper sexual proclivities (gay).

12. There were two marriage celebrations documented in the Gospels, wherein Mary Magdalene bathed the feet of Jesu, anointing him with expensive Spikenard oil. This was a bridal ritual of a Jewish woman of that period. No man in his right mind would have allowed any woman to perform such a ritual – unless they were marrying. Secondly, it is documented that Jesu “kissed her on the mouth, often”. Fact – no man would have openly dared kiss a woman, unless they were married. Hence the evidence is extremely strong for their marriage.

Even so, does this detail ‘matter’ in the grand scheme of things? Does it change his teachings or diminish his message in any way? I think not.

Imagine a world where men of the Church could marry and have progeny, as God willed it – and then examine what has become of many of the Priests within the Church in today’s world, and let us consider what is natural, righteous and spiritual.

13. Two Messiah’s were expected, both of Judaic and Roman texts. Most consider John the Baptist to have been the first, and Jesu the second. However, my book will reveal another story entirely – and it has the power to overthrow the powers of the world we live in today.
My book will reveal all – COMING SOON – 2019

14. Still two-thousand-years later, Jesu is the most famous Saint in the world. His message survived, despite having been changed and ‘cleaned up’ by every Pope, and King, in history, to suit political, financial and religious agenda’s.

15. Jesu was not born in December, as books tell us. Actually he was born under the star of the Lion (Leo) in end of July/beginning of August, per Judaic laws of that time. If he had been born in December he would have been stoned to death, as his birth would not have been sanctioned by the laws of the Torah.

His example is spotless. He was and remains without stain.